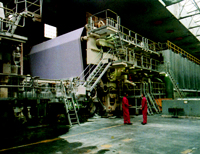 We were approached by one of our long standing customers in the paper industry to solve a problem in one of their paper mills. They had experienced problems during re greasing of universal joints on universal shafts fitted to their paper machine.

We redesigned the shafts to incorporate grease nipples in all 4 bearing caps on each universal joint which meant that a grease nipple was always available for re greasing through the maintenance hatch wherever the machine stopped. This saved our client time and money and with the introduction of a water- resistant grease we also improved the lifetime of the universal joints.

To book an engineer, please fill in your
information below and we will be in touch.